Talented Melbourne singer-songwriter Bom combines his generous onstage charisma with an honest and persistent work ethic that has seen him play hundreds of gigs over the last 15 years. His passionate and emotive performances have taken him to audiences around Australia, London, Berlin and two US tours supporting Marie Wilson (Atlantic Records).

Signed to BMG publishing and following work with L.A. producer David Snow (Little Hipster Records), Bom is releasing and launching his debut album much to the delight of his loyal fan base.

Entitled ATOMIC RAGE, this long awaited album, distilled from nearly 50 of his most performed songs, gives old fans a top-shelf taste of this uniquely Melbourne artist. This well crafted collection will no doubt introduce him to new fans as well and cement his main agenda of humanity first.

Songs such as “Atomic Rage” tap into generations of anti-war anger – as palpable in 2019 as it was in 1945.   The sweet strumming of ‘Smile’ and ‘Immaculate Heart’ just make you feel toe-tapping good. “Take me to Higher Ground” uplifts – a new father of two baby girls – calls for our greater humanity. “We can do better,” Bom says and his message is simple!   “We have enough food, money and land!  Let’s take care of our people”.

A few great writers feature on this album – Bom himself (Paul Bombig) as well as Gavin D’Monte, Lisa Zembrodt and Jamie Stanton.   This offers a diverse lyrical and melodic collection of simply produced songs – perfect for lovers of honest, no-frills, passion-filled Rock.

“An authentic artist who writes from his big heart and sounds exactly like himself. “

“Bom is such a fun person to work with, always delivering an electric show”.

Bom on the journey to his debut album ‘Atomic Rage’ 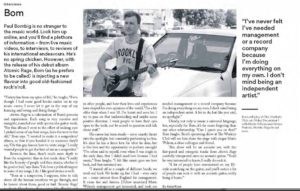